A man and a woman walk through the park together, holding hands. They pass an old woman sitting on a bench. The old woman is knitting a small, red sweater. The man begins to cry. Write this scene.

Today’s twist: write the scene from three different points of view: from the perspective of the man, then the woman, and finally the old woman. 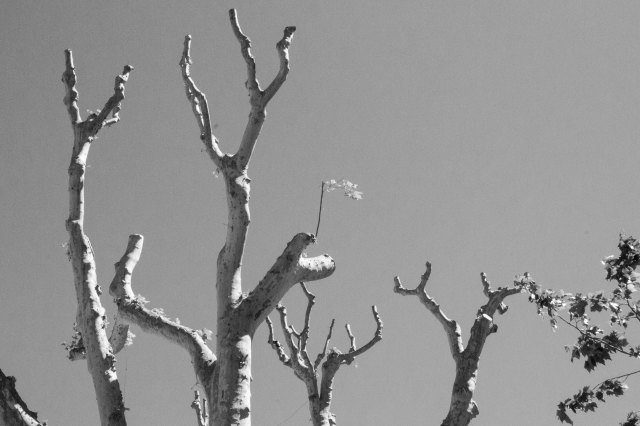 A Small Red Sweater – Woman’s POV
(The same story in man’s POV was posted on June 13.)

Amy is glad that Jim has taken her pregnant news well. When Jim suggested taking a walk in the park, saying walking is good for pregnant women, she couldn’t help patting her own back. “Congratulation! You’ve found Mr. Best!” she said to herself.

She doesn’t care much about holding-hands. When Jim put her hand into his, she pictures in her mind how Jim would hold their child’s hand. Then she feels quite all right.

Should Jim and I marry each other for baby’s sake? I don’t know. We love each other. We can marry for love. But, right now? Oh, who is thinking about marriage? Focus. Focus on the baby.

Amy’s thought is interrupted by a sudden movement of Jim’s hand. Looking up, she notices tears in Jim’s eyes. Turning her head, she sees an old woman sitting on a bench knitting a small red sweater. Jim is thinking about the baby! She puts her arm around Jim’s shoulder.

Wait a second. Why does he sound sad? Is there… another baby? His? What’s happened? Who is the mother? Or, maybe he thinks I’ve tricked him? He feels being trapped?

Amy doesn’t like man cry. When she was a little girl, many times she heard her mother say she married to a loser. She didn’t believe her. After her mother left them, her dad drank more and cried a lot. Every time she saw her dad cry, she remembered how her mom called him a loser.

Jim is crying; Amy has no idea why, and she is not sure she is ready to find out.

Jim extends his hand toward Amy.

Did I say that in my head? It doesn’t matter, does it? I need a Time out and I am giving myself one.

A retired computer programmer who loves writing and photographing, and has managed to publish a YA novel "Jin-Ling’s Two Left".
View all posts by Helen C →
This entry was posted in Writing 101. Bookmark the permalink.