This is the 4th part of my travel to Alpine Countries for Lens-Artists Photo Challenge #27: My Travels.

Continue from my previous post… (Due to popular demand, story will go on… Ok, ok, Manja was the only one who asked me to continue my story. So, for Manja… )

We stopped at Simplon-Pass for a restroom break, I think. I don’t remember if we had lunch there or not. My guess is we probably did, but that part of the trip is totally blank. Other than remembering seeing some Swiss Army guys eating food there (Wei took some photos of them), I had no recollection of food.

It was the first time we saw mountains right in front of us –Day 10 of this trip! I felt like running toward them. “I bet our slightly overweight tour guide can’t catch me!” I thought to myself.

Soon, it was time to leave. “I am NOT leaving. Pick me up on your way back,” I said.

Our tour guide laughed. “This is nothing. You’ll have better views later,” he said and went straight to the bus, leaving me behind.

The ground was pretty wet; sitting on the ground kicking legs was definitely not an option. Deduct $5 from the tip, I noted.

Lucerne was actually after Zermatt. But I want to save Matterhorn to the last.

Pilatus, also often referred to Mount Pilatus, is a mountain massif overlooking Lucerne in Central Switzerland. It is composed of several peaks, of which the highest (2,128 m (6,982 ft)) is named Tomlishorn.
The top can be reached with the Pilatus Railway, the world’s steepest cogwheel railway…
– Wikipedia

(Mount Pilatus – Lucerne) We rode a train like this to the top!

The ride up from Zermatt to Gornergrat was crowded (We shared the ride with two traveling groups from Taiwan!) We were lucky to find seats – of course, all window seats were taken. Although Wei doesn’t care to shoot through glass window, with scenery like this, he couldn’t resist. He started shooting from the wrong side of the train. A couple from Washington State, who sat by the window, kindly offer me their window seat. I kindly pass the opportunity to Wei. Wei was happy. Click, click, click… Many clicks later, he seemed suddenly remembering that he has a wife; he stepped aside and let me take some photos. I quickly took a few. Noticing several Chinese tourists envyingly looking at us, I said to them, “Come on, take some photos!”

Three jumped out of their chair instantly, rushing to the window. Click, click, click… Many clicks later, I began to see that they had no intention to leave the spot. Wei was waiting to take more photos; he became impatient. He wasn’t happy for losing the spot, I was sure. avoiding Wei’s eyes, I turned to the Washington-State couple. While talking to them, I checked on Wei’s situation, from time to time, with the corner of my eyes.

I have a problem… I don’t know why… Wei’s angry face often makes me laugh. Trying hard not to burst into laughter, I could feel my face started twitching. In spite of all my effort, a couple of smiles managed to surface. I looked like a crazy old woman!

It took a while, but, at last, Wei got the spot back. I felt relieved. Time to sit back and enjoy watching him having a good time.

The photo above shows the train station where we got off the train. The view was spectacular (need me to point it out?) A wet and somewhat icy staircase will bring us to an even higher ground. High altitude made it difficult to breath for Wei. He told me to go up by myself and he would wait at where we were. I suspected that the problem was more mental than physical. I said to him, “We don’t have to rush. Let’s take one step at a time. If you want, we can always turn back.”

We made it. Then we found out there is an elevator somewhere.

I was surprise to see the national flag of Republic of China was used by one tour leader from Taiwan as the guide flag (not sure what it calls). I borrowed it so Wei could take a photo of me holding the flag. In no time, I sent the photo to my friends back in Taiwan. They were as surprised as I was.

The Matterhorn is a mountain of the Alps, straddling the main watershed and border between Switzerland and Italy. It is a large, near-symmetrical pyramidal peak in the extended Monte Rosa area of the Pennine Alps, whose summit is 4,478 metres high, making it one of the highest summits in the Alps and Europe. — Wikipedia 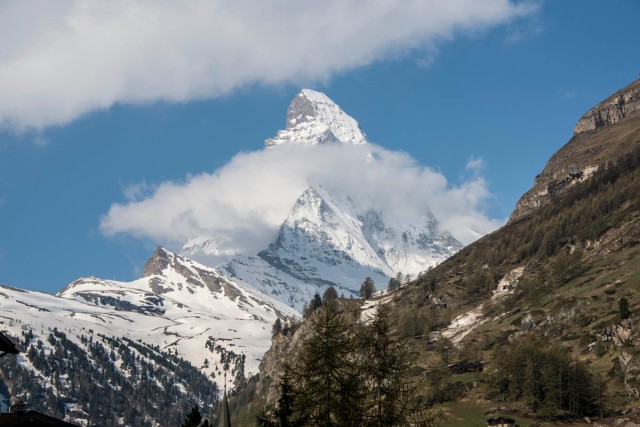 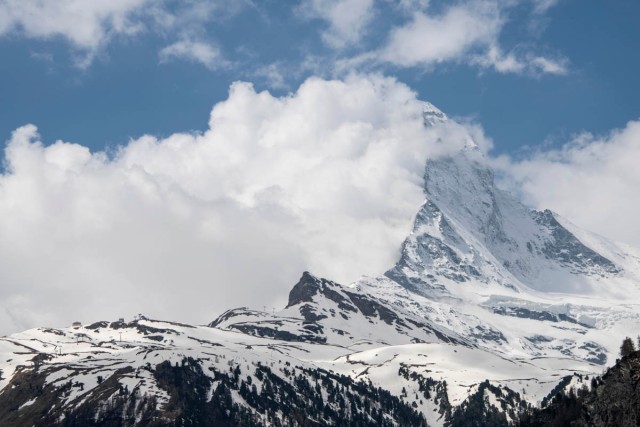 On our way back, we visited Rhine Falls, Black Forest… etc. Frankly, I don’t remember a thing…

A retired computer programmer who loves writing and photographing, and has managed to publish a YA novel "Jin-Ling’s Two Left".
View all posts by Helen C →
This entry was posted in photo, Travel and tagged lens-artists. Bookmark the permalink.