This is my submission for Lens-Artists Photo Challenge #27: My Travels.

We flew to Frankfurt, and spent one night there. Near our hotel, I was introduced to “garden houses”. A piece of land in the city, it looks like our mobile home park, contains many small houses with gardens. Someone told me these families would spend weekends here to get away from their city life in the city. 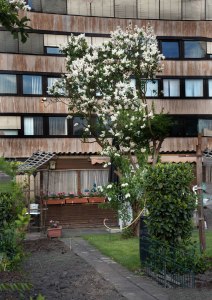 (A small garden house in front of a tall building)

Walking back to the hotel from those garden houses, I saw a bus stop at the bus stop. It took me a while to notice the driver was waving to me. He pointed at himself suggesting me to take a photo of him. I did and he was very happy (He didn’t know how bad the photo had turned out. Ha.) A good start of the trip, I thought to myself.

From Frankfurt, we went to…

Munich
We were delighted when we found out there were less than 30 people on the bus, which would usually fit near 50 people. Wei and I happily occupied 2 seats toward the back. 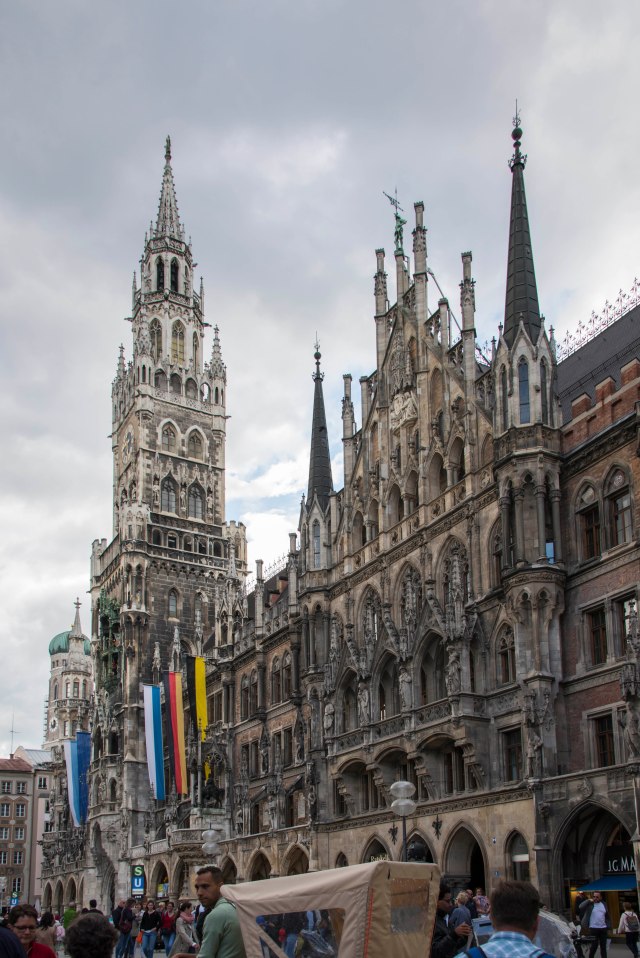 At Marienplatz, we got some free time. Our tour guide instructed us to meet back at 12:30 and he added, “If you are not here by that time, I will assume you have walked back to the hotel by yourself. It’s hard to find a parking spot. We will not wait.” He showed all of us how to get back to our hotel, and said, “It’s very simple.”

There was a parade on that day; Marienplatz was very crowded. After taking some photos, Wei and I decided to head back to the hotel. The walk was much longer than I thought, but we survived. Our tour bus came back late (we were waiting for the bus to continue our afternoon program). When it finally arrived at the hotel, we were told that our tour guide had asked the driver to circle around 3 times looking for us. “Didn’t he say if we were not there, he would assume we had walked back by ourselves?” I asked. Everyone smiled. Apparently, no one had taken our tour guide’s words seriously (not even himself) except us.

One famous local dish around here is German Pork Knuckle (roasted pig feet). “Since we are here, we may as well try it,” I said to Wei. We found a restaurant; German Pork Knuckle and German beer was our yummy dinner! After eating the meal, we wondered how much to tip. We gave some money to our service person and told her to keep the change; I saw a huge smile on her face. OK, we over tipped, I thought to myself, and then turned around said, “It’s all right, we are on vacation.” I said it to Wei and to myself.

Tipping is very confusing in Europe; no tip in some countries; 10% other countries, which we often forgot because we were so used to 15% or more. (Would someone create an iPhone app for this, please?)

(The fountain that was filmed in The Sound of Music) 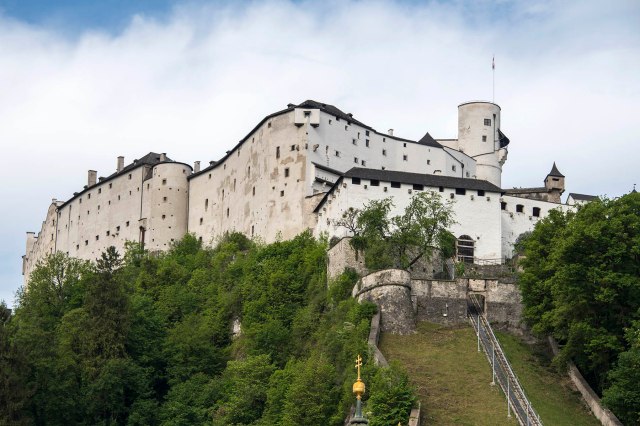 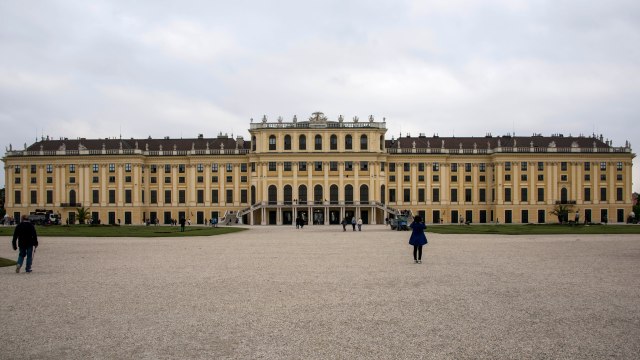 Five days into this trip, we hadn’t seen a single mountain. “Did we sign up for the right trip?” we wondered. I had been Vienna before, but hadn’t visited the other cities. They are all beautiful cities in their own ways. Still, we yearned to see mountains and we were getting more and more impatient.

I’ll stop here for part one. Maybe that was why I hesitated to write about this trip – I don’t know how to make it short.

A retired computer programmer who loves writing and photographing, and has managed to publish a YA novel "Jin-Ling’s Two Left".
View all posts by Helen C →
This entry was posted in photo, Trips, Weekly Photo Challenge and tagged lens-artists. Bookmark the permalink.