This is my submission for XDrive Photo Lesson 13 – Raw vs Jpg.

As I said in my previous post, nowadays I only shoot in raw, but for this lesson, I shoot in raw and jpg. In other words when I click, two images will be recorded by the camera: one in raw, and one in jpg.

I guess many of my readers are shooting in jpg. In my post for lesson 12, even though I didn’t spell it out, I was trying to show that shooting in jpg is quite all right. I believe when Raj encouraged us to shoot in raw, he meant if we are “serious” in photographing. Not everyone is serious in photographing even though almost all of us are serious in catching moments. I wasn’t serious until two years ago.

I have two confessions: (1) I have several 20×30 photos hanging in our family room, and they were shot with a point-and-shoot camera and they were shooting in jpg. They don’t look like professional photos (I didn’t know Photoshop at the time), but they never fail to bring a smile to my face because they remind me of the good time our family had in Ireland. (2) When I first started using a DSLR, I shot in both raw and jpg; I always edited the raw photo. Many times after I had completed editing, I found out that the jpg my camera had created looked better than mine. I didn’t zoom-in to check all the details, but I liked what I saw.

With that said, moving forward… now that I am more serious in photographing, I enjoy Raj’s lessons a lot. In this lesson, he showed us, with examples, the difference between shooting in raw and jpg. I encourage you to read the lesson.

Raj was focusing on over/under exposed photos in his lesson. I like to start with a normal, neither over nor under exposed photo. In Raj’s comment for my previous post, he said, “In general, a nicely exposed picture would not show so much of difference with raw vs jpg.”

The jpg version is a little more colorful — on my PC, maybe not in WP (also seemed being cropped?). Still, I think camera did a pretty decent job in converting raw to jpg, don’t you agree? They look quite similar, if you ask me. 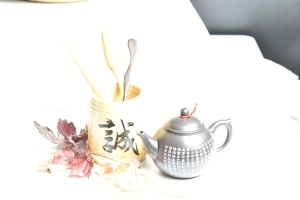 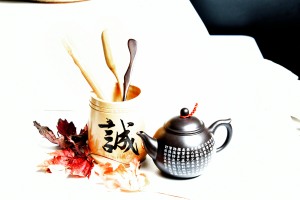 Clearly, jpg has lost more details (look at the leftmost tea tool in the cup). 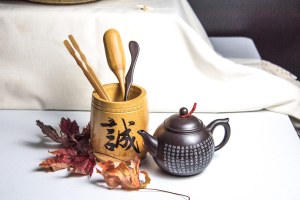 I would like to point out that if you have to choose either under expose or over, choose under expose because you can recover the photo much better.

My conclusion? I will continue shooting in raw (because I want to ;-), but I will not hesitate shooting in jpg if I have to deliver photos quickly. (Fair, Raj?)

I learned a lot from this experiment, which, I am sure, wouldn’t happen if I am not taking Raj’s lesson. Thank you, Raj.

A retired computer programmer who loves writing and photographing, and has managed to publish a YA novel "Jin-Ling’s Two Left".
View all posts by Helen C →
This entry was posted in photo, photo and thoughts and tagged XDrivePhoto. Bookmark the permalink.