Since it is not granted to us to live long, let us transmit to posterity some memorial that we have at least lived.
— E. Joseph Cossman

We had attended our local Memorial Day Celebration at Soldiers Field a couple of times before. Now that I’ve gotten to know myself better as a photographer, I was looking forward to this year’s celebration.

I googled and found the celebration was on May 27. How could it be? Memorial Day is May 29! I checked again and again. Sure enough, it said May 27. Maybe we decided to celebrate a couple of days earlier because of the weather forecast? (This is Minnesota after all!) It must be!

So, Wei and I packed our cameras and drove to Soldiers Field. No one was there!

Have you ever had the feeling that you might not know who you really were? Am I alive and living in this world? I quietly took out the paper I’d printed. It said May 27, but it said 2013. ;-(

I had put a lot of trust (expectation?) in Google that it would display the most current information first and, apparently, I was wrong. And how stupid I was that, again and again, I stopped reading right after I saw the date, before seeing the year?

My conclusion: blind trust is dangerous.

However, it turned out to be a good photographing day. Since only a few people were there, I had plenty of time visualizing each picture before pressing the shutter release button.

Then, suddenly, I felt like to cry. I don’t know anyone whose name was on the wall, but we, somehow, were able to connect.

I remembered David, one fallen soldier’s father, told me that holidays (Thanksgiving, Christmas…) were difficult. Every morning during holidays, his son usually was the first one walking into the kitchen, asking “Is coffee ready, Dad?”

Some gave all. Don’t let the memory of them drift away. 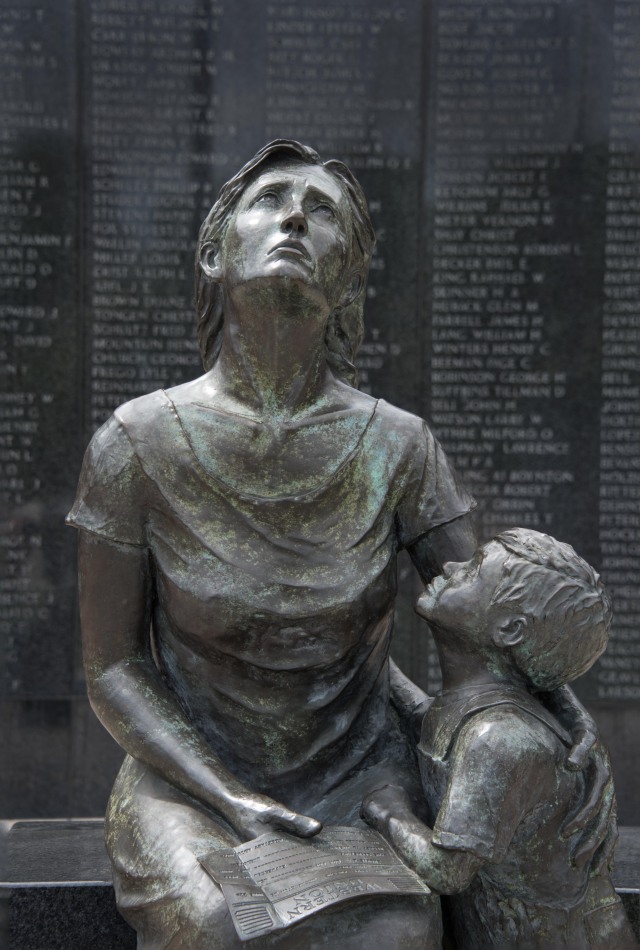 A retired computer programmer who loves writing and photographing, and has managed to publish a YA novel "Jin-Ling’s Two Left".
View all posts by Helen C →
This entry was posted in photo and thoughts, Weekly Little Thought. Bookmark the permalink.