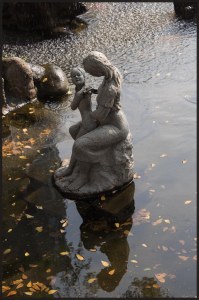 “Taking pictures is like tiptoeing into the kitchen late at night and stealing Oreo cookies.”
— Diane Arbus

Finally, it was the photographing day (3/26/2017)! I got up early, kept asking Wei when his nephew, Kuenhwa, would come. Kuenhwa came around noon and said that taking sunset photos at Gaomei Wetland was our major plan. He then took us for a wonderful lunch (one of the best green onion pancakes I had ever tasted!), and after lunch we went to National Taiwan Craft Research & Development Institute to kill some time so we would arrive at Gaomei Wetland right before sunset.

At National Taiwan Craft Research & Development Institute, Kuenhwa asked me which photo mode I used. I told him that I was quite comfortable with A (aperture-priority), S (shutter-priority), and P (program) modes, but most of the time I used P mode. He said, “You should use M (manual) mode.”

“I am not good enough to use M,” I said. Wei had said that I could take a photo with P mode to find out the aperture and shutter speed settings and then use those settings as a base to take next photo in M mode. But that was too much work and too little gain, I think.

“Use meter, it’s not that hard,” Kuenhwa said.

The only meter I knew was the external light meter, and since I had enough trouble with the camera, there was no way for me to consider using an external device, so I simply ignored his words. After Kuenhwa asking me a couple of times if I started using M mode, I finally said “What meter?”

He pointed at the meter on my camera screen. “There. You can start shooting with 0 setting, take a look at the photo, and then adjust the exposure.”

Ha ha… I had never noticed that meter. It only shows up in M mode and I had used M mode probably twice. In case some of you don’t know either, here is a photo of the meter. 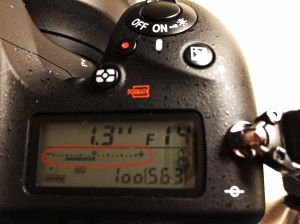 After I learned how to use the meter, I liked M mode much better. Here is why: since most of the time, I do know what aperture or shutter speed I like to use (I know one of them, not both), by using M, I have an easier way to set the exposure as the way I want it to be. Hmm… let me give you an example. A lot of time, I know what aperture I want to use because I know the DOF (depth of the field) I like to achieve. In that case, using M mode makes it easier to set the shutter speed because all I have to do is rotating the shutter speed dial until the meter reads close to 0. (If I use A mode, I can’t control the shutter speed.) I hope this makes sense. ;-(

National Taiwan Craft Research & Development Institute has a lot of stone sculptures. The first photo I posted here, my favorite sculpture, was taken in M mode; the second one was Wei’s photo. Because of the location of the sculpture, there was no way to get the reflection from where I stood. I was glad that Wei got it in his photo. (This means I should walk around more. But to my defense, I was busy practicing M mode at that time.)

Of course when I only have limited time to take a shot, I will still use P 😉

Turning around one corner, I saw sun rays shining through tree leaves. I commented on how difficult it was to get the starburst effect. Wei told me all I had to remember was to use a small aperture. He was right!

I practiced this again later at home. 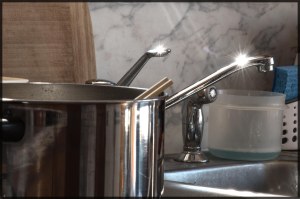 I saw other photographers taking photos at National Taiwan Craft Research & Development Institute, too. Apparently, it is a popular place for photographing.

So, before arriving Gaomei Wetland, I’ve learned (1) how to take photos in M mode (2) how to get starburst effect (3) do not stay at one spot and be satisfied. If Taking pictures is like stealing Oreo cookies, I felt I had stolen enough cookies by then. 😉

To keep this post short, I’ll stop here. 😉 Gaomei Wetland will be next.

A retired computer programmer who loves writing and photographing, and has managed to publish a YA novel "Jin-Ling’s Two Left".
View all posts by Helen C →
This entry was posted in photo, photo and thoughts, Weekly Little Thought. Bookmark the permalink.