Two years after I retired, I am relaxed enough to celebrate a Chinese New Year. I cleaned the house, washed bed sheets (we do clean the house, wash bed sheets often, in case you wonder. 😉 It’s just that this time, it is done for the New Year.) and I made a year cake, dumplings, and buns. 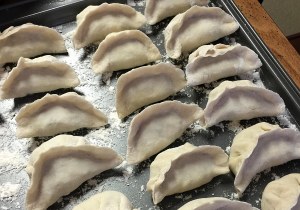 Chinese New Year makes me think of family and home; I can smell the homemade sausages, salty pork, sweet and soft year cake, and see children wearing new clothes running up and down the streets playing, shouting and laughing.

The preparation started a week before the New Years day. Mom would buy several fresh pork hams from the meat market and cut some into big slices and the rest into one-inch chunks. She marinated the meat in soy sauce, five-spices and some special Chinese liquor. Those 95% proof stuff, when you place a drop in your mouth, it stings and then evaporates instantly. If you take a sip, it burns like fire. I didn’t like that liquor, but the marinated meat, on the other hand, smelled like heaven.

Mom cleaned the pork casing and tightened a knot at one end. She then stuffed the small chunks of meat into casings to make sausages. She hung the sausages and big slices of marinated pork in the yard on a bamboo post. We, the kids, took turn to poke holes through sausages with a sewing needle, so when sausages dried up under the sun, the fat would drip down through the holes to the ground. The tiny popping sounds from poking sausages were, somehow, quite satisfactory and the smell of soy sauce mixed with the liquor was mouthwatering.

Washing the sliding doors, on the other hand, was an unwelcome chore. We lived in a Japanese style house that had many sliding doors. The bottom half of the door was a piece of solid wood, but the top was divided into 12 small squares by several half-inch wide wood pieces running both horizontally and vertically, and was glued on a piece of rice paper. We didn’t replace the rice paper every year; we only replaced it when we couldn’t glue another layer of rice paper on top of the existing one. So, when it was time to wash the doors, we had to deal with 4 layers of yucky glues and papers and they were difficult to come off. I didn’t like that job at all.

The week before New Years day was also the time to make year cake. The year cake was made out of sweet rice flours. Since sweet rice flours were not available in the market back then, we had to grind the rice ourselves. The grinder had 2 huge pieces of round stones. The top one had a handle so people could hold on to it and turn it around, and it also had a hole to allow you to add water. When the top stone was turning around, the rice between the two stones was ground into flour. Not many families could afford a grinder, so we had to wait for our turn. As soon as we got the grinder, we hurriedly made the cake because there were other families waiting to make theirs.

Steaming the cake was something else. The cake was usually 15 inches in diameter and 3 to 4 inches high. It took forever to be fully cooked and if you mistakenly took the cake off the heat before it was done, the cake would be ruined. We steamed our cake in the yard. Mom had to make sure the fire was not extinguished before the cake was done.

While Mom was busy making sausages and year cake, my siblings and I were having fun playing with neighbor’s kids. We went to movies, or played hide and seek in the yard. While we were not watching, Mom managed to buy some small tangerines, candies and cookies, and hid them in the house so we wouldn’t start eating them before the New Years day.

New Years Eve was one of the busiest days for Mom. She got up early in the morning so she could beat other housewives to buy fresh meat, vegetables and fruits. New Year’s Eve dinner consisted of 7 or 8 dishes. There were lion’s-head (meat balls cooked with Chinese cabbage), stewed beef and eggs (beef and egg cooked in soy sauce), deep fried eggplant stuffed with ground pork and many other dishes. Ever year Mom prepared a fish dish, but the fish wouldn’t make it to the dinner table. Since the sound of “fish” is similar to the sound of Chinese character for “more than enough”, every family saved their fish dish until after the New Year. People believed that by doing so, they would have something extra year after year.

At New Year’s Eve dinner Dad would dip a chopstick into his liquor and let us taste it. It was after we started college, we were allowed to have a glass of plum wine. But good food and wine were not important for kids. We swallowed our dinner as fast as we could and excused ourselves from the table to join our friends for another round of hide and seek. Of course, we had waited for Mom and Dad nod their heads saying that we could leave.

By 11 PM, the hide and seek game was over. Chinese believed that if the kids stayed up until the midnight on New Years Eve, their parents would live longer. In order to keep us awake, Dad would start playing the head-or-tail game with us. He gave us each 20 quarters. We place a bet on either head or tail while he spun a coin. If we guessed right, we won more quarters, but if we were wrong, we would lose the ones that we had bet on. I hated losing, so I usually quit early. No matter how Dad tried to encourage me, I simply would not play. Still, I had great fun watching they play. At 12 o’clock sharp, the game was over. We said “Happy New Year” to Mom and Dad and received a red envelope containing lucky money. Most of the kids would agree with me that getting the lucky money was the highlight of the Chinese New Year.

The sound of fireworks started around 4 o’clock in the morning on New Year ’s Day. By 5 o’clock, it became nonstop. As soon as the sky turned a little bright, we would jump out of the bed, put on our new clothes and ready to go out. I loved the smell of the fireworks. It was the smell of the New Year, I was convinced. The fireworks went on for 3 days.

By 8 or 9 o’clock, we gathered all the kids in our neighborhood. Together, we visited every family in the neighborhood, wishing them Happy New Year, and every family, in return, gave us treats like candies, dried fruits and drinks.

Visiting all the families in the neighborhood took about 2 hours. By lunchtime, the visiting was over for the kids, and it was then the adults’ turn to visit friends. Although friends’ visiting lasted three to five days, I always felt the New Year celebration was over by the noon of New Year’s Day. Sometime we started a firework war by throwing a firework to each other. We threw, ran, and prayed that we had more fireworks than our opponents.

Jan. 15 officially marks the end of the Chinese New Year. It is also Lantern Festival. All the kids in the neighborhood would carry a paper lantern with a burning candle in it. Those lanterns looked gorgeous in the dark. Sometime, we hung the lanterns on a tree and played another round of hide and seek. After the game, we each went home and had a bowl of sesame dumplings. Sadly, that was the end of the Chinese New Year celebration.

Gradually, we, Chinese in America, lost our tradition in celebrating Chinese New Year. Most people in my generation don’t even know how to make Chinese sausages. “At least, we have memories,” we comfort ourselves. But, are memories alone enough to pass on to the next generation?

A retired computer programmer who loves writing and photographing, and has managed to publish a YA novel "Jin-Ling’s Two Left".
View all posts by Helen C →
This entry was posted in Memoir. Bookmark the permalink.